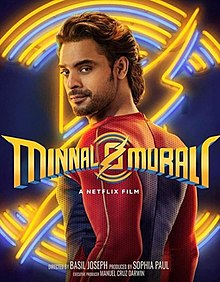 There were controversies related to the movie long before the release of this movie. The set was destroyed by Hindu extremists. But I think this only made the hype around the movie more.

The movie was not released in theaters, but in Netflix. While many would have loved to see this movie in the big screen, Netflix release made it possible to reach the movie across the world. And its become the top ten performer in Netflix.

Now coming to the movie, this is Basil’s third directorial. I loved both his previous movies – Kunjiramayanam and Godha. Both made me laugh a lot.

Like his previous movies, this is also set in fictional village (Kurukkan Moola in this movie) and time period in the early 1990s.

I have been seeing the trailer for a long time now (it was released around a year ago), but the movie unlike the trailer focusses on both the hero and the anti hero.

This is a good thing as Tovino Thomas as the protagonist has the charm while Guru Somasundaram as the antagonist is simply mesmerizing. That’s why I said its a super villain movie – once you see this you will become a fan of Guru.

The story is simple, the visual effects are okish, the music and background score are good.

There are a lot of jokes in between which some perhaps only a Malayali who lived in the 90s can catch. I don’t know if the dubbed versions will do justice (I haven’t watched the dubbed versions – but I think the negative reviews by many may be due to this).

Please do note that this is just like any other movie in South India. Its lengthy and filled with jokes. Nevertheless if you liked Basil’s previous movies, then this is a must watch.

If you watched Minnal Murali, please free to comment your thoughts below.