Bodied is a movie about battle rapping. As one of the dialogues in the movie – Battle Rap is not boxing its a street fight – its a good one. Its co-produced by one of the best rappers of our generation – Eminem. 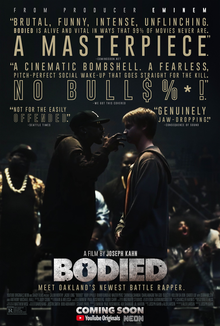 The story is about a a white graduate student at Berkeley – named Adam who is writing a thesis on the use of the word “nigga” in battle rap. He gets involved in the battle rap a bit more than he thought. But he turn out to be insanely good, but this messes up his personal and student life.

This movie probably went under the radar as its not family appropriate (Battle Raps isn’t for family viewing – there are some pretty bad words involved).

As per my opinion, this is a terrific movie. Its straight out outrageous and rude, but its funny and makes us laugh at the same time. This movie is way better than 8 mile. There is not a dull moment in this one.

The acting is top notch. The screenplay by Alex Larsen is a gem.

I would rate this movie as 5 stars out of 5.

Do watch it if you haven’t and write your suggestions below.

DO check out my other reviews.