Smokin’ Aces was released way back in 2006, this slick comedy action movie still seems fresh even years after release. 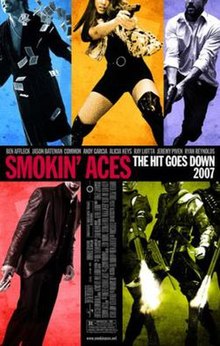 This movie is written and directed by Joe Carnahan (the man behind The A-Team and The Grey). The story is about Las Vegas magician and wannabe gangster Buddy “Aces” Israel – who turns into a mafia informant. Now on his head, a one million dollar bounty is placed. Now a number of assassins (neo nazis, lady assassins – you name it), bounty hunters and the law – are all after him. This is where the fun begins. All the guys come together and the shit storm action begins.

The story isn’t the best, but this is a fun action flick. You can call it a dumb fun action movie. Don’t use your brains during the viewing and you will love it. As I said earlier – it still seems fresh after all these years. Its pretty underrated by the reviewers – the critics. This is not a family movie – but its entertaining for most men and their male friends. Not to be watched with your wives or girlfriends. They won’t find the humor in it.

I would rate it as 3 stars out of 5. Do see it if you can find it in any of the streaming services – it will be worth your time.