Code 8 is a 2019 Canadian science fiction movie. Its a feature-length version of the 2016 short film of the same name. 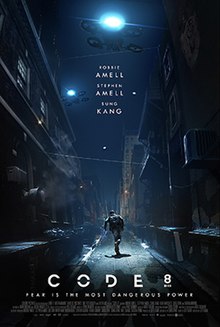 In 2016, a short movie was released by Robbie Amell and Stephen Amell. They gathered over 3.4 million by crowdfunding to make a full feature length move.

There are lots of superhero movies being released these days. This too is a suerhero movie.

It tells about a world where a small fraction of the population are born with super abilities. But instead of having success, they face discrimination everywhere and they live in poverty. Naturally some resort to crime and

I think that it didn’t get the attention as it was not released by a big Hollywood company. But now its available in Netflix.

If you are a fan of sci-fi then this is a solid watch. Its a solid movie with a basic story line, good acting and effects. Its a combination of superheros, sci-fi, action, heist genres.