Dark Waters is a 2019 American legal movie based on the real life of lawyer Robert Bilott who led a 20 year legal battle against the chemical manufacturing giant DuPont. 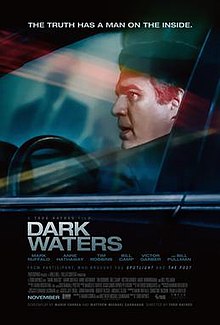 The story is about Robert Bilott who works at Taft Stettinius & Hollister law firm, gets into a legal battle with DuPont.

This movie in my opinion may not be classified as a thriller as they have said. This movie is for those people who likes a solid story (which is dramatized from the real events taken place) excellent acting and direction.

The movie takes us through the eyes of Robert Bilott as he goes against the might of the Dupont. The film also showcases the personal and professional issues that he faces during the period.

Moreover this film reveals the utter negligence by DuPont for the health of people and environment – and their greed and power.

I would rate this movie 4 stars out of 5.