Its around 8 km from Thrissur town. You can reach the temple also via Ollur (3km from Ollur) or Palakal(2.5km from Palakkal). If you are coming from Kodunagallur/Irinjalakuda side, then its around 3.5km from Poochinipadam center.

The main festival is Sivarathri.

These photos of were taken on the morning of the Shiva Rathri festival. At that time there is the mesmerizing Kavadis. 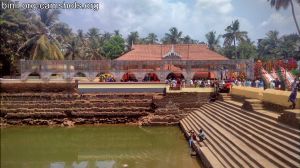