Vallachira bhagavan bhagavathi temple is an old traditional hindu temple currently under the Cochin Devaswom Board. The temple is located in the village of Vallachira in Thrissur district, Kerala State, South India. The temple is dedicated to bhagavathi (female personification of the Divine – as Kali) even though the presiding deity is Maha Vishnu (as Sree Narayanan).

The temple is situated in front of a large chira or pond whose name is Vallachira and the name of the place is derived from this pond. The construction layout is typical of a Kerala temple architecture, and so are the rituals in the temple.

These shots were taken during the Kumbha Bharani festival on 29th Feb 2020, on other days the temple won’t be crowded as shown in pictures. 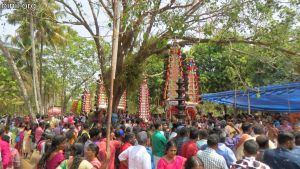 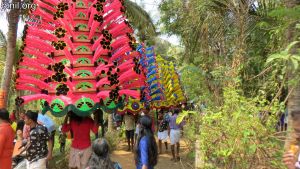 Do check out other temples listed in this site.