Wilmington is a city in and the county seat of New Hanover County, North Carolina, United States. 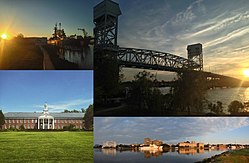 The real estate slump could get worse before it gets better. Business 2.0 Magazine, in its November 2006 issue, identifies 10 markets that offer great opportunities for those who have the patience to buy and hold – and real estate here is in the 7th spot.

The population was 75,838 at the 2000 Census. A July 1, 2007 United States Census Bureau estimate placed the population at 99,623. It is the principal city of the Wilmington Metropolitan Statistical Area, a metropolitan area that covers New Hanover, Brunswick, and Pender counties in southeastern North Carolina, which had an estimated population of 339,511 as of July 1, 2007. It was named in honor of Spencer Compton, the Earl of Wilmington, who was Prime Minister under George II.

Wilmington was settled on the Cape Fear River and offers its historic downtown with its one mile long Riverwalk as a main tourist attraction. It is minutes away from nearby beaches. The National Trust for Historic Preservation named Wilmington, North Carolina one of its 2008 Dozen Distinctive Destinations. City residents have the advantage of living nestled between the river and the ocean with Wrightsville Beach a short 20 minute drive from downtown.

In 2003 the city received, through an act of Congress, the designation of “A Coast Guard City”. The city is also home port for the USCGC Diligence, a United States Coast Guard medium endurance cutter..

The town is home to the University of North Carolina Wilmington, the Wilmington Hammerheads USL soccer team, the training camp site for the Charlotte Bobcats and the Cape Fear Museum. The city has become a major center of American film and television production; motion pictures such as A Walk To Remember, Blue Velvet, Teenage Mutant Ninja Turtles, Empire Records, Cape Fear, Black Knight, 28 Days, The Crow (death place of Brandon Lee), Nights in Rodanthe and the controversial Dakota Fanning film Hounddog; as well as television shows such as Matlock, Surface, The WB’s Dawson’s Creek and One Tree Hill have been produced there.

Do check out my reviews